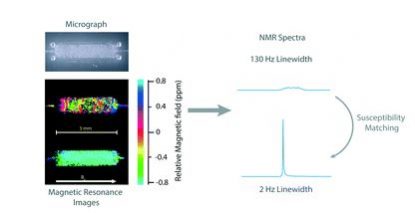 Microfluidic-NMR spectroscopy has been extended to study the kinetics in supramolecular chemistry and molecular assembly. Kinetics of a multicomponent host-guest supramolecular system containing viologen derivatives, β-cyclodextrins and cucurbit [7]urils are studied by a PMMA based microfluidic chip combined with a dedicated transmission line probe for NMR detection. By combining microfluidic technology with NMR spectroscopy, the amount of material required for a full kinetic study could be minimized. This is crucial in supramolecular chemistry, which often involves highly sophisticated and synthetically costly building blocks. The small size of the microfluidic structure is crucial in bringing the time scale for kinetic monitoring down to seconds. At the same time, the transmission line NMR probe provides sufficient sensitivity to work at low (2 mM) concentrations.

In this paper we present a wirelessly powered array of 128 centrifugo-pneumatic valves that can be thermally actuated on demand during spinning. The valves can either be triggered by a predefined protocol, wireless signal transmission via Bluetooth, or in response to a sensor monitoring a parameter like the temperature, or homogeneity of the dispersion. Upon activation of a resistive heater, a low-melting membrane (Parafilm™) is removed to vent an entrapped gas pocket, thus letting the incoming liquid wet an intermediate dissolvable film and thereby open the valve. The proposed system allows up to 12 heaters to be activated in parallel, with a response time below 3 s, potentially resulting in 128 actuated valves in under 30 s. We demonstrate, with three examples of common and standard procedures, how the proposed technology could become a powerful tool for implementing diagnostic assays on Lab-on-a-Disc. First, we implement wireless actuation of 64 valves during rotation in a freely programmable sequence, or upon user input in real time. Then, we show a closed-loop centrifugal flow control sequence for which the state of mixing of reagents, evaluated from stroboscopically recorded images, triggers the opening of the valves. In our last experiment, valving and closed-loop control are used to facilitate centrifugal processing of whole blood. 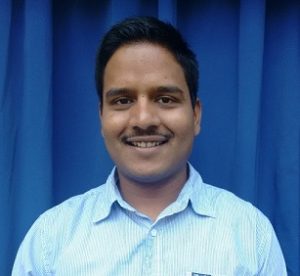 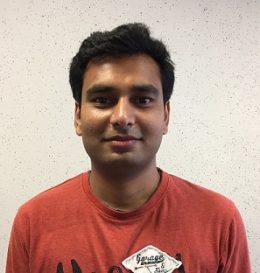 Bishnubrata Patra is a research fellow in the Dept of Chemistry at the University of Southampton. He completed his Ph.D. at National Yang-Ming University, Taiwan in Biophotonics and Bio-engineering. Bishnubrata’s main interests are designing microfluidic devices for tissue/ cellular spheroid culture and integrating them with NMR spectroscopy. 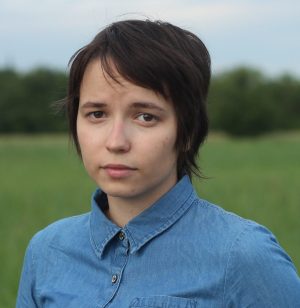 We are delighted to announce the following have accepted an invitation to speak at TISuMR 1: Symposium On Tissue Culture and Magnetic Resonance: 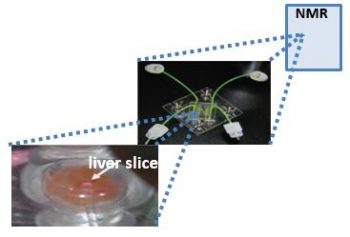 At the University of Groningen, Verpoorte and colleagues will develop an innovative technology platform that integrates nuclear magnetic resonance metabolomics and micro-imaging with microfluidic tissue-slice perfusion culture. This platform is poised to revolutionise life science research by providing unprecedented local insight into physiological processes in intact tissues under highly controlled conditions. The team will focus on liver tissue-slice culture, with the immediate target of elucidating the mechanism of liver damage by drug-induced cholestasis. In the long term, the new technology will find wide application in other tissues, including intestinal, pancreatic, and brain slices. It will form the foundation of a new approach in the life sciences, allowing the detailed metabolic study of tissues at the system level.