The Lab-on-a-Disc (LoaD) approach was conceived in the 1990s as a sub-class of the more generic µTAS (from MicroTotalAnalysingSystems). The µTAS concept was derived ~10 years earlier with the hope to make a complete chemical and, therefore, also biological analysis of all type of liquids in an integrated and automated way. The idea was to create a mini lab in a piece of glass or even plastic by using the shrinkage of all channels and components to obtain highly branched networks of unit operations that allow complex analyses. Most modern desktop analysis machines (like glucose or haemoglobin) are based in some sort on that idea. To move away from work benches with glasses and vials that are handled by highly trained personnel and replace them by microchannels and microchambers where one can perform simple diagnostics automatically, that triggered the idea to make laboratory diagnostic outside of clinics. If the analysis could be performed nearly semi-automatic outside of a clinic’s lab, would the patient still have to come to the clinic for initial tests? Saving the patient the long way to a real hospital, by placing a semi-automated diagnostic in the rural communities, is especially valuable in developing countries were this might take days. One obstacle in that endeavour was the need of precision pumps to drive the liquids through the channels and often also the usage of complex tubing, Lab-on-a-Disc circumvented the need of pumps by spinning the whole microfluidic chip and using the resulting centrifugal forces to drive the liquids. In the last two decades this led to a large variety of the diagnosable diseases using LoaDs.

The original idea of a (µ)TAS system to chemically completely analyse a liquid is and back in the 1980s already was performed much better by another technique – the NuclearMagneticResonance (NMR) Analysis. NMR is based on the modulation of an electromagnetic signal, by the content the liquid, allowing to get information directly from its molecular composition. Many atoms i.e. Hydrogen, when placed in a magnetic field and activated by an electromagnetic wave of a specific frequency, answer by sending back a signal of the same frequency (hence the name resonance). This signal is now not 100% at the same frequency but it is modulated slightly by the magnetic fields caused by the molecules present in the liquid. A spectral analysis of the signal in the frequency domain, therefore, shows characteristic peaks that are fingerprints of the molecules present in the liquid.

Since NMR can be seen as the real TAS system, can an integration of the two not lead to a true µTAS system, ignoring for now the little flaw that the NMR magnets are nearly 2 m high? Both systems use liquid analytes in fairly small quantities (µl to ml). Also, the rotation is beneficial for both, while it drives the LoaDs it is used in NMR to improve the signal quality in a technology called magic angle spinning. Automation in NMR is done via a carousel that loads the test tube sequentially into the machine, the handling of small plugs of sample is one of the key technologies in LoaD and could, therefore, improve the high throughput sample handling. The merging of these two very well-established technologies will allow to improve sample handling in NMR significantly while at the same time shrinking the needed sample volume. 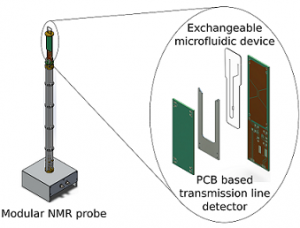 Nuclear magnetic resonance (NMR) is an analysis technique which is widely used in physics, medicine and chemistry. As NMR is a non-invasive and non-destructive method, it is used to image soft tissue inside the human body in the form of Magnetic resonance imaging (MRI). Conventional liquid-state NMR spectroscopy is usually performed on 200-800 microliter sample in a 5-10 millimeter diameter tube. Although conventional NMR is successfully used for a variety of applications, many problems cannot be adequately addressed by it. For example, bodily fluids from small animals are usually available in much smaller quantities compared to the sample volumes required by conventional NMR.

Microfluidics is a well-established field for manipulation of small sample volumes in microliter to nanoliter range. Due to small sample volumes, physical conditions for a sample can be precisely controlled with minimum resources. NMR can be used to study these systems for various chemical or biological processes.

We have developed a platform that can study generic microfluidic setups with NMR. This new setup requires 100 times less sample volume compared to conventional liquid-state NMR. The sample is held in a planar microfluidic chip made from plastic materials. The microfluidic chip can be used as a passive sample holder or a flow can be induced to supply different liquids. Gases can be dissolved in liquids on the chip for chemical reaction or oxygen supply to biological systems. The temperature at the chip can be tightly controlled to study different physical conditions. As the chip is placed in the NMR detector all the systems can be studied in real-time in their native environment. The setup has already been used for various experiments including reaction monitoring, micro-imaging of mouse liver tissue slices, and metabolic studies of mammalian cells.

The usage of animals for laboratory testing annually costs millions of rodents’ lives worldwide. In our project, we significantly reduce the number of animals used by implementation of the precision-cut tissue slice model (PCTS). This model represents an exciting opportunity for the future of in vitro and toxicology research for a number of reasons.

One advantage of using the PCTS model is that dozens of tissue slices can be produced from even the smallest organ, allowing vast numbers of experimental conditions to be tested for each animal. When compared to in vivo studies, where only one experimental condition can be tested, we are drastically reducing the total number of animals needed.

Moreover, every one of the many slices produced using our method maintains the complex internal structure of each organ. PCTS are therefore also responsible for the generation of robust and highly translatable data, allowing for strong prediction of clinical toxicity and development of effective disease biomarkers.

The complete cessation of animal tissue use is unlikely to occur soon. Looking forward, however, the use of the PCTS model in combination with body-on-a-chip systems may someday remove the need for whole animal studies altogether. The development and characterization of the PCTS model is therefore most certainly a step in the right direction to reduce the ecological footprint of toxicology research both now and in the future.