A novel approach for automated high throughput NMR spectroscopy with improved mass-sensitivity is accomplished by integrating microfluidic technologies and micro-NMR resonators. A flow system is utilized to transport a sample of interest from outside the NMR magnet through the NMR detector, circumventing the relatively vast dead volume in the supplying tube by loading a series of individual sample plugs separated by an immiscible fluid. This dual-phase flow demands a real-time robust sensing system to track the sample position and velocities and synchronize the NMR acquisition. In this contribution, we describe an NMR probe head that possesses a microfluidic system featuring: (i) a micro saddle coil for NMR spectroscopy and (ii) a pair of interdigitated capacitive sensors flanking the NMR detector for continuous position and velocity monitoring of the plugs with respect to the NMR detector. The system was successfully tested for automating flow-based measurement in a 500 MHz NMR system, enabling high resolution spectroscopy and NMR sensitivity of 2.18 nmol s1/2 with the flow sensors in operation. The flow sensors featured sensitivity to an absolute difference of 0.2 in relative permittivity, enabling distinction between most common solvents. It was demonstrated that a fully automated NMR measurement of nine individual 120 μL samples could be done within 3.6 min or effectively 15.3 s per sample. 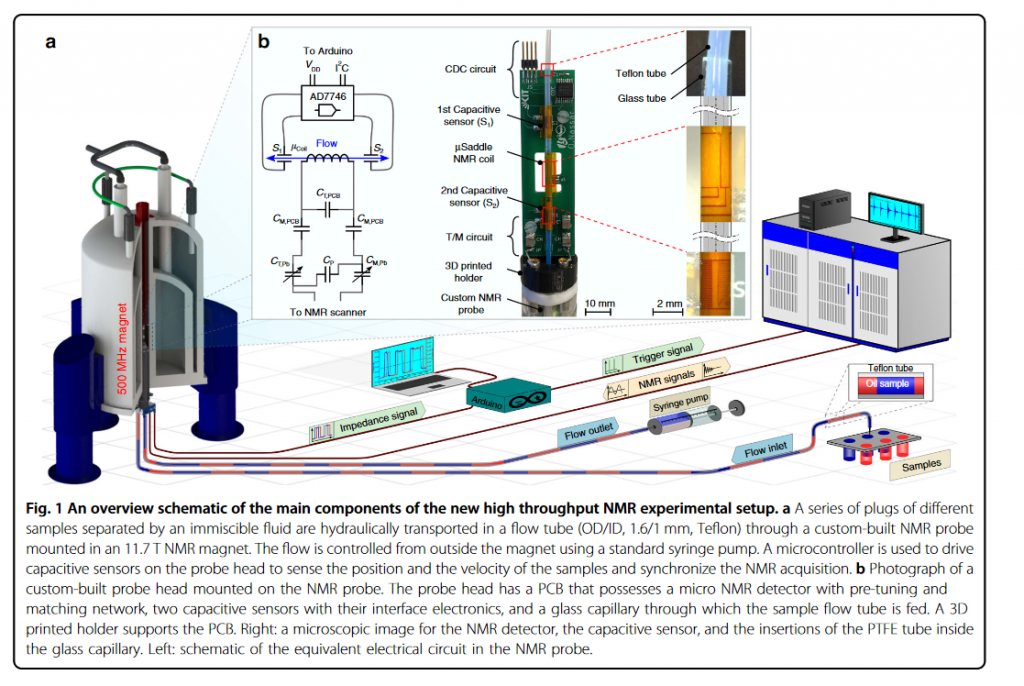 Nuclear magnetic resonance at low field strength is an insensitive spectroscopic technique, precluding portable applications with small sample volumes, such as needed for biomarker detection in body fluids. Here we report a compact double resonant chip stack system that implements in situ dynamic nuclear polarisation of a 130 nL sample volume, achieving signal enhancements of up to − 60 w.r.t. the thermal equilibrium level at a microwave power level of 0.5 W. This work overcomes instrumental barriers to the use of NMR detection for point-of-care applications.

Computer aided design (CAD) views of the ODNP probe inside a palm-sized permanent magnet. The microfluidic chip features a sample reservoir and a MW resonator. A stacked figure-8 type RF transceive coil accepts the sample container and is sandwiched between a set of bi-planar electrical shim coils. A B0-field modulation coil is part of phase sensitive EPR detection. Figure used with permission.

We present a microfluidic platform that allows in operando nuclear magnetic resonance (NMR) observation of serial mixing experiments. Gradually adding one reagent to another is a fundamental experimental modality, widely used to quantify equilibrium constants, for titrations, and in chemical kinetics studies. NMR provides a non-invasive means to quantify concentrations and to follow structural changes at the molecular level as a function of exchanged volume. Using active pneumatic valving on the microfluidic device directly inside an NMR spectrometer equipped with a transmission-line NMR microprobe, the system allows injection of aliquots and in situ mixing in a sample volume of less than 10 μL.

It is challenging to investigate fast supramolecular processes due to the lack of appropriate characterization methods with high structural resolution. In this study, microfluidic NMR spectroscopy as employed to monitor the kinetics of threading and dethreading of a pseudo[6]rotaxane system. By employing the high-time resolution of microfluidic NMR, 1H and 2D-ROESY NMR spectra were recorded at any time point 1.5 s after the onset of the process. By employing this technique, kinetic intermediates and rate-determining steps were successfully identified, which is not possible by other spectroscopic techniques. Our study demonstrates the capability of microfluidic NMR in investigating the mechanism of complex supramolecular systems.

We present a quantitative study of the metabolic activity of a single spheroid culture of human cancer cells. NMR (nuclear magnetic resonance) spectroscopy is an ideal tool for observation of live systems due to its non-invasive nature. However, limited sensitivity has so far hindered its application in microfluidic culture systems. We have used an optimised micro-NMR platform to observe metabolic changes from a single spheroid. NMR spectra were obtained by directly inserting microfluidic devices containing spheroids ranging from 150 μm to 300 μm in diameter in 2.5 μL of culture medium into a dedicated NMR probe. Metabolite concentrations were found to change linearly with time, with rates approximately proportional to the number of cells in the spheroid. The results demonstrate that quantitative monitoring of a single spheroid with ≤ 2500 cells is possible. A change in spheroid size by 600 cells leads to a clearly detectable change in the l-Lactic acid production rate (p=3.5×10−3). The consumption of d-Glucose and production of l-Lactic acid were approximately 2.5 times slower in spheroids compared to monolayer culture of the same number of cells. Moreover, while cells in monolayer culture were found to produce l-Alanine and l-Glutamine, spheroids showed slight consumption in both cases. 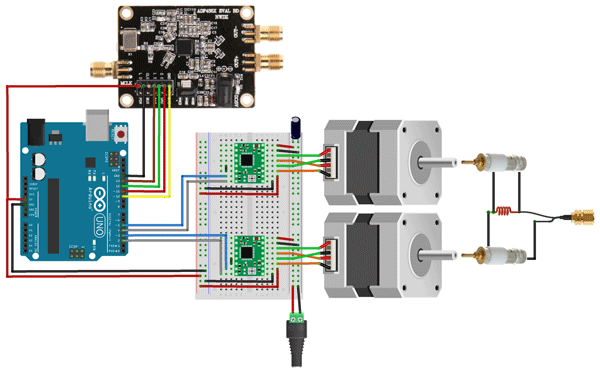 We introduce a low-complexity, low-cost, yet sufficiently accurate automatic tune and match system for NMR and MRI applications. The ArduiTaM builds upon an Arduino Uno embedded system that drives a commercial frequency synthesiser chip to perform a frequency sweep around the Larmor frequency. The generated low-power signal is fed to the NMR coil, after which the reflected waves are detected using a directional coupler and amplified. The signal shape is then extracted by means of an envelope detector and passed on to the Arduino, which performs a dip search while continuously generating actuator control patterns to adjust the tune and match capacitors. The process stops once the signal dip reaches the Larmor frequency. The ArduiTaM works readily with any spectrometer frequency in the range from 1 to 23 T. The speed of the ArduiTaM is mainly limited by the clock of the Arduino and the capacitor actuation mechanism. The Arduino can easily be replaced by a higher-speed microcontroller, and varactors can replace stepper-motor controlled variable capacitors. The ArduiTaM is made available in open source, and so is easily duplicated.

This paper presents the topology optimization of hierarchical microtextures for wetting behavior in the Cassie-Baxter mode, considering a structural unit of the hierarchical microtexture composed of base and secondary structures. The geometrical configuration of the considered structural unit can be described as a fiber bundle composed of an external surface of the base structure and the pattern of the secondary structures. Thus, two design variables are defined, one for the external surface of the base structure, and the other for the pattern of the secondary structures. The Young-Laplace equation, including a term depending on the mean curvature of the external surface, is used to describe the liquid/vapor interface imposed with a surface tension in the Cassie-Baxter mode. To overcome the difficulty of numerically computing the second-order derivative of the external surface, two partial differential equation filters are sequentially applied to the design variable of the base structure to ensure the numerical accuracy and feasibility of using an efficient linear-element-based finite element method to solve the Young-Laplace equation. To improve the performance of the hierarchical microtextures, the volume of the liquid bulges suspended at the liquid/vapor interface in the Cassie-Baxter mode, before the transition into the Wenzel mode, is minimized to optimize the match between the external surface of the base structure and the pattern of the secondary structures. In the topology optimization process, penalization of the material density of the surface tension is achieved by an artificial Marangoni phenomenon. In numerical examples, solid surfaces are tiled into textures with axial symmetry, radial symmetry, chirality, and quasiperiodicity; and structural units are derived consisting of base structures with peak shapes and dense secondary structures surrounding the crests of the peaks. The optimized performance of the derived structural units has been confirmed by comparisons.

Multilayer flexible substrates offer a means to combine high lateral precision and resolution with roll-up processes, allowing layer-based manufacturing to reach into the third dimension. Here we explore this combination to achieve an otherwise hard-to-manufacture resonator geometry: the double-helix. The use of commercial flexPCB technology enabled optimal winding connections and a versatile adjustment to various operation fields, sample volumes and resonance numbers. The sensitivity of the design is shown to greatly benefit from the fabrication method, though optimal electrical connections and several radially-wound windings, and was measured to outperform an equivalent solenoid despite the known geometrical disadvantage.